Shopping Cart
Your Cart is Empty
Quantity:
Subtotal
Taxes
Shipping
Total
There was an error with PayPalClick here to try again

Thank you for your business!You should be receiving an order confirmation from Paypal shortly.Exit Shopping Cart

As the Corso has become more popular in the UK, we have seen an increase in the number of dogs, both old and young that have become unwanted through no fault of their own. Some of these dogs have been neglected and abused some are given up by their owners due a change in their circumstances and some are dogs who are just not understood by their owners.

Unfortunately, there is only a small handful of breeders in the UK that will take their stock back if a person's circumstances change and they are no longer able to keep the dog. When you buy a puppy the breeder should always have the welfare of the puppy at the forefront of their minds and they should be willing to take the dog back, if at a later stage, your circumstances change and you are no longer able to care for the dog.

Please be wary of breeders that have multiple litters of puppies over the course of a year, generally this is purely to line their own pockets and they do not have the breeds best interests at heart, how can they if they continue to churn them out when the breed rescue simply cannot cope with the demand of people wanting to dump their dog. This breed is not for everyone and there are unfortunately not enough good homes out there for these majestic dogs.

Similarly please be wary of cheap imports being offered. Unfortunately many of these dogs have started life in a puppy farm and enter the UK under age on fake documents. If you are looking to import, please do so responsibly and take the time to visit the breeders abroad to ensure the puppy you are getting had the best start in life in terms of housing, socialisation, diet and mental stimulation.

When considering owning a Cane Corso, please don't always think about getting a puppy, consider a rescue. Re-homing a Cane Corso can be a very rewarding experience. I've done it myself and I have my wonderful boy Van that I wouldn't be without. He is a true ambassador for the breed as he had been so badly neglected, abused and mistreated and yet he was and still is the most trusting, loving dog I have ever known. Van loves everyone and everything. I think that a lot of people are put off rehoming an adult dog because they are worried about the dogs temperament and if they will be able to retrain the dog successfully, I certainly had these concerns initially until I got involved in rescuing and now I can honestly say that it's the most rewarding thing I have ever been involved in.

Currently, sadly we are the only breeder in the UK that is active in Cane Corso Rescue and rehabilitation. We hope that in the future, other breeders in the UK may be in a position to offer help/sanctuary to unwanted Corsos until forever homes come along.

I received a call from one of my puppy owners Joanne, who lives approx 2 hours away from me. Joanne said that she was aware of a 6 month old Corso male that lived not far from her whose owners wanted to rehome him. Joanne asked if I would be interested in taking him and I immediately said that I would. Joanne spoke with the dog?s owner and informed him that CCCUK would take the dog immediately.

The following weekend, myself and my sister drove the 2 hours to collect Capo. As soon as we arrived at Joanne?s house the guy brought the dog to us, said nothing and left. Capo had cherry eye but looked in reasonable condition and appeared friendly. We brought him home, settled him into his kennel and gave him some food. Once he had settled in we introduced him to Luna. He was initially very scared and appeared quite aggressive but once he realised that Luna meant no harm he was fine.

Over the course of the next few weeks Capo clung to Luna and followed her everywhere. We slowly introduced Capo to the other dogs whom he was fine with.

Once Capo had learnt to walk on the lead I took him out by himself. I discovered that he was quite aggressive towards other dogs when he was on the lead but I felt that this could be corrected with training.

We had Capo for a month and within a very short space of time it felt like he had always been with us. After approximately 1 month, CCCUK contacted me to say that they had someone very interested in Capo, the home check had been completed and was fine. That weekend Emma drove up from London to meet Capo. Everything went well and Capo went home with Emma. I was a little upset because I had grown so fond of him but at the same time I was happy that he was going to the lovely home that he deserved.

I leant a lot of things from fostering Capo. I leant that Corsos adapt fairly quickly to new surroundings, they can adapt well to a change in situation, they are grateful for a second chance and they can be taught new things very quickly with the correct training. I felt good that I had helped to give Capo a second chance with a great new owner and it was great to see him change so much in the short time I had him.

(1st pic is of Capo when we collected him & then after a few weeks after being with us.)

Mo was collected by the dog warden and taken to the same kennels where we had rescued Van from a few years earlier. I visited Mo his first week, it was such a pitiful site seeing him, he was terrified, underweight and he looked so sad. I wished the next 7 days away calling the kennels frequently for updates on Mo and was pleased to hear that he was eating well and responding to cuddles and affection.

7 days passed and no one came to collect Mo from the kennels. I made arrangements to collect him as soon as I could and brought him back to Telesto.

The first few days were very hard for Mo, he was anxious and scared although he did take a lot of comfort from the other dogs who were more than happy to have him around and who played a huge part in his rehabilitation here.

With a week, Mo was a different dog, very happy, loved to play with all the other dogs, he thoroughly enjoyed his food, his walks, his cuddles and his playtime, it was an absolute pleasure to have Mo around and to see him transform before our very eyes.

A number of people followed Mo?s progress via the Friends of Cane Corso forum and we were extremely lucky that when it came to finding Mo a wonderful forever home we needed to look no further than Donna and Ian from Scotland who had been members of the forum for sometime.

Donna and Ian and their lovely Staffie Jay, came down to visit and got on very well with Mo so a few weeks later, Mo left us for sunny Scotland and a wonderful home with Donna, Ian and Jay. 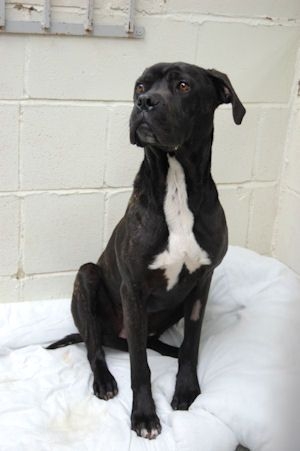 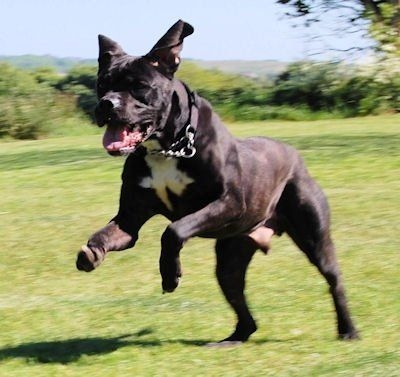 (1st pic shows Mo in the rescue kennels, the other pics show Mo when he was with us).

Barney was just 4 months old when he entered the rescue system. He was already in his 4th home and unfortunately, due to a change in circumstances, his current owners were no longer able to keep him and so signed him over to rescue. Thankfully, we had a fantastic home lined up for Barney, a family who had been waiting for a very special Corso and who lived not far from us. One snowy winter day, we collected Barney and drove him to his new forever home where he is now a treasured part of the family.

Over the last few years, we have helped many rescues with Corsos and other Bull breeds including Presas, American Bulldogs, DDB, Bullmastiffs and mastiff cross breeds. All of these dogs have been rehomed successfully and are happy and very settled in their new homes.

If you think you could give a large dog a second chance please look at the following web sites for details of special dogs needing wonderful forever homes.